Arsenal goalkeeper Aaron Ramsdale has been labelled the best English goalkeeperby Leicester City manager Brendan Rodgers after the England international made a stunning save to deny the Foxes an equaliser in the first half. At the time, hosts Arsenal were leading thanks to a Thomas Partey header and his goal proved to be the difference between the two teams at the break. 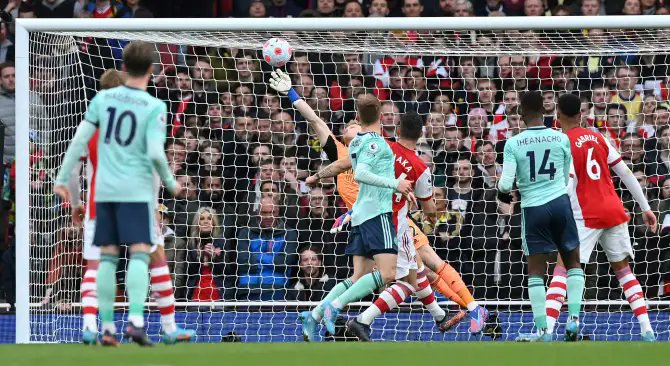 Frenchman Alexandre Lacazette doubled the advantage for Arsenal just before the hour mark with the second goal from the penalty spot to end the game as a contest as the Gunners edged closer to Champions League football via a 2-0 win.

England shot stopperRamsdale was magnificent in the Arsenal goal against Leicester City once again as he denied winger Harvey Barnes who looked certain to score with a header. Rodgers was on the touchline and he was about to celebrate his team finding the back of the net before the stunning save from the England shot stopper denied the Foxes the goal. He had earlier made an unbelievable save from a James Maddison free-kick when the two teams met earlier in the season with Arsenal running out 2-0 winners with goals from Gabriel Magalhaes and Emile Smith-Rowe in the first half. He made several stunning saves in that first league meeting between Leicester City and Arsenal including the aforementioned strike from Maddison.
Rodgers praised the quality shown by Ramsdale in his post-match press conference after the game against Arsenal on Sunday as he called him the best English goalkeeper at the moment.
A lot of people have called for Ramsdale to be the number one choice for England ahead of regular recipient Jordan Pickford with the Qatar 2022 FIFA World Cup tournament eight months away. Ramsdale has kept 12 clean sheets from just 23 Premier League appearances this season.