Frenchman Ousmane Dembele was on target twice as his Barcelona side were pegged back in a 2-2 draw with Italian side Juventus. Dembele and Barcelona are presently on the tour of the United (US) and they took on a Juventus side also on tour of the same country on Tuesday night. 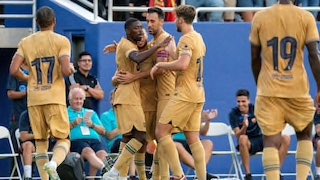 Dembele proved to be too much for Juventus as the opposition defenders were at his mercy. He scored his two goals in the first half either side of the first Juventus goal from Moise Kean who had previously played for French team Paris Saint Germain (PSG) and Everton in England. Former Everton attacker Kean scored in the second half to ensure that Juventus avoided defeat at the hands of their Spanish La Liga opponents.

Barcelona were boosted this summer with the contract renewal of Frenchman Dembele. The winger could have left the club on a free transfer this summer, but he stayed by signing a two-year contract extension until the end of the 2023/24 season. Before his contract extension at Barcelona, Dembele was linked with some teams in England. Chelsea and Manchester United were teams reported to be keen on signing him as a free agent in England. Since his new Barcelona contract was confirmed, the Frenchman has scored three goals in three pre-season games.
In his first pre-season game this summer, Dembele came off the bench to score in the second half as Barcelona ran riot against Inter Miami from the MLS (Major League Soccer). He scored one of the goals as Barcelona thrashed their hosts 6-0.
Dembele didn't find the back of the net in his second pre-season game as Barcelona beat arch rivals Real Madrid 1-0 courtesy the stunning goal from new signing Raphinha whom they signed from Leeds United in England. He then scored twice in the third pre-season game at the expense of Juventus as stated earlier.